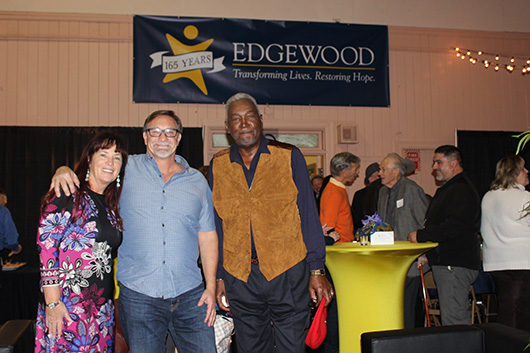 On December 7, 2016, Edgewood Center for Children and Families held a reunion to celebrate 165 years of helping youth and families.

Just over 100 guests attended the event with some who came from as far away as Arizona, Utah, and Oregon – all to reconnect with colleagues, and for many, return to the place that was their only home. Matter of fact, many of the guests in attendance had a connection to Edgewood for over 75 years – almost half of the time that Edgewood has been in operation.

The event was made possible by Jan and Dave Marson. Jan, an Occupational Therapist, and former Edgewood employee understand how hard Edgewood staff work to support children in crisis. In order to give back to Edgewood, she and Dave have focused their philanthropic efforts on developing staff in a number of ways, including hosting the reunion, supporting trauma-informed systems training and opening a scholarship fund for staff. As owners of Nature’s Bakery, she and her husband are in tune with Edgewood’s mission and enjoy giving back to Edgewood and helping staff succeed.

Recently, they provided funding so Edgewood staff can be trained in trauma-informed systems training (TIS). Now, thanks to the Marson’s support, Edgewood is one of the first community-based organizations in the Bay Area to undertake this training. Read more about TIS here.

The 165th Reunion was a truly magical event, and it meant so much to reconnect with old friends, meet people with such a long history with Edgewood, and to spend time with current staff who are making a difference in so many kids’ lives.

We also enjoyed welcoming back Morris Kilgore who served as Edgewood’s leader for decades, and Wendy Thibeault and Pam Philbrick whose father played that role in the 1940s and 1950s when Edgewood was their childhood home.

There were so many touching memories shared including meeting one resident, Bill Brockway, who lived in “cottage one” as a child in the 1940s. During the celebration, he presented an American flag pin to Edgewood’s CEO, Nancy Rubin – a gift he received as a child from his cottage mother on the first anniversary of Pearl Harbor. It was a touching gesture of how much Edgewood has meant to him and a poignant reminder of our mission of transforming lives and restoring hope.

Your ticket for the: Edgewood Celebrates 165 Years