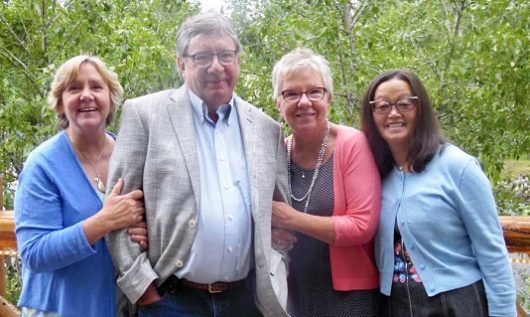 Suzy Vogler wants Bay Area foundations to know one thing: if you really want to have a long-term impact, choose a trustworthy organization that shares your values and let them decide where the greatest need is.

That relationship of trust and generosity runs deep for Vogler, who along with her siblings serves as a trustee for her family’s foundation, Willow Springs Charitable Trust, named after her grandparents’ farm, Willow Springs.

Deeply committed to education, humanitarian causes, and supporting disadvantaged and vulnerable children, Willow Springs has been making grants to Edgewood since 2000 totaling $2.8 million. In that time, the foundation’s impact has been felt in everything from launching Edgewood’s School-Based Behavioral Health Services and developing and evaluating its teacher training program, to helping youth in crisis through the Magill Fund and stepping in with emergency funding when Edgewood needed it most.

“Our parents gave early on to their community in Illinois, writing $300 and $400 checks to help people, even when they didn’t have a lot, and that stayed with us,” said Vogler. “Our philanthropy has never been about us – it’s about what we can do to impact those who need it most and about making a difference for future generations.”

Based in Mount Carroll, Illinois, the Foundation is governed by Suzy and her sisters Jenny Stoddard and Sara Foszcz and her brother Kent Brodie. Family members confer with one another about which organizations to support each year, with gifts focused on Illinois and the communities where the siblings live. Vogler has lived in San Francisco since 1978 and has given generously to organizations here.

“It’s absolutely fantastic to know the foundation has had such a powerful impact on Edgewood’s work with vulnerable young people and their families,” said Vogler. “If I have the means to pay it forward, it’s my right and my duty to make an impact on others.”

Vogler’s giving is also inspired by her own life story: Adopted from a Korean orphanage at a young age by American parents, Vogler returned to the place of her birth in 2014, “bringing my life full circle,” said Vogler, whose Korean name is Choi Sung Jin.

She said she hopes foundations and individuals will step forward now to join the campaign to improve the aging buildings that house Edgewood’s K-12 school. “This is such an important priority with direct impact on the daily lives of the students. A warm, inviting space for learning makes a huge difference. The kids deserve no less.”

Your ticket for the: Foundation Spotlight: Willow Springs Charitable Trust