Bay Area Housing is ‘On The Table’ at Edgewood 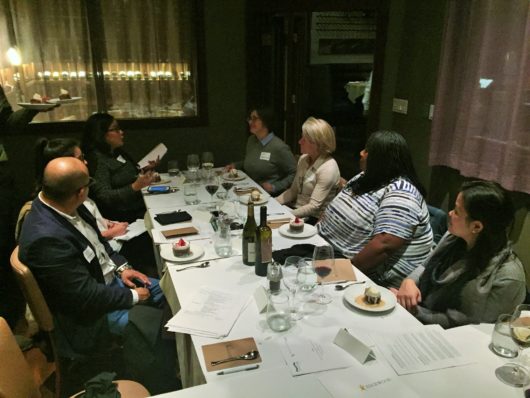 12 Edgewood stakeholders come together to discuss what steps they can take to tackle the San Mateo housing crisis.

A diverse group of 12 Edgewood stakeholders came together over dinner at a San Mateo restaurant on November 13 to discuss the Bay Area housing crisis as part of “On the Table,” a community conversation sponsored by Edgewood in partnership with the Silicon Valley Community Foundation.

Made possible by the generous gift of an Edgewood Board member, the convening brought together the executive director of a local foundation, a San Mateo County Human Services Agency representative and Edgewood’s leadership and program staff with donors and corporate partners to discuss housing and homelessness in San Mateo County, where Edgewood served more than 3,000 children, youth and families last year.

“We don’t currently address housing, but we may in the future, so I’d like to stay ahead of the curve,” said Ash McNeeley of Sand Hill Foundation, when asked what brought her to the discussion. “The cost of housing has driven 17% of people in San Mateo and 18% in Santa Clara into poverty,” said Edgewood CEO Lynn Dolce. “In San Francisco, most foster kids are placed in other counties because families can’t afford to live here.”

Charlie Gonzalez, CEO of CG Moving, said 90% of his employees must commute long distances because of San Francisco’s steep housing costs. Edgewood Board chairperson Kimberly Summe said she witnessed a similar housing crisis in New York City, where she worked as a volunteer for the Court Appointed Special Advocate program for 20 years. Edgewood donor Nancy Mancini said housing insecurity and homelessness are “root problems” of other issues in the Bay Area. Edgewood program staff member Cynthia Green, who manages Edgewood’s transitional housing program Turning Point SF, said 30% of the youth she works with have experienced homelessness before joining the program.

Among possible solutions guests raised were a marketing campaign to remove the stigma of affordable housing, better utilization of county housing resources, building tiny houses, providing background checks for prospective renters so they can live in empty nesters’ spare rooms, staying with a relative, or estate planning that includes donations of real property to affordable housing uses after a person dies.

Edgewood CEO Lynn Dolce shared her concept that may someday convert part of Edgewood’s property to foster family housing or units for families that need Edgewood’s support to heal from trauma or practice healthy family life skills. She added that the planned launch of the Edgewood Institute for Learning and Development could also bring policy and advocacy work to bear on the housing issue to help improve outcomes for vulnerable children, youth and families facing homelessness.

“We may not be experts in housing,” Dolce said, “but we have resources that may someday be part of the solution.” Started by the Chicago Community Trust and replicated by the Knight Foundation, “On the Table” drew tens of thousands of people together across the country as part of a broad civic engagement initiative to discuss the most pressing issues facing each community.

Your ticket for the: Bay Area Housing is ‘On The Table’ at Edgewood

Bay Area Housing is ‘On The Table’ at Edgewood