Supporting Edgewood’s Work for over 50 years

Founded in 1948, the Edgewood Auxiliary raises funds and awareness for Edgewood Center for Children and Families. Since 1967, Auxiliary members have staged the Edgewood fair. Over the years, this sophisticated fundraising party and shopping extravaganza has raised more than $8 million to support Edgewood’s work.

Today, Auxiliary members continue to be a vital part of the Edgewood family by volunteering on campus, leveraging philanthropic donations, and building community awareness for our organization. The 55th Edgewood Fair was held virtually on May 20 & 21, 2021, thank you to all our generous supporters!

To learn more about this exciting annual event, including information regarding our Virtual 56th Edgewood Fair taking place in Spring 2022, visit our Edgewood Fair page.

About The Edgewood Fair

The Edgewood Fair began on May 3, 1967. But the founders organized this ambitious event nearly a year before.

“We want to offer fairgoers diverse items and ideas to bring added beauty to their homes and gardens,” Auxiliary President Nancy Maushardt wrote. “All the proceeds will benefit the children of Edgewood.”

We’ve kept this vision consistent through four decades of social and cultural change and have maintained many of the same elements from the very first fair. Members of the Auxiliary continue to oversee the production of the Fair, from invitations to advertising. Edgewood’s children participate by growing flowers in container gardens, building bird feeders, and painting pictures to be displayed at the Fair.

The first Fair netted $5,000 and was such a success that the Auxiliary immediately began to plan the first of its many encores. In the ’70s, the Fair introduced the Country Kitchen featuring the Auxiliary’s homemade mustards, chutneys, and sauces. The ’80s brought the inclusion of exhibitors offering goods ranging from jewelry to artwork.

Demetra Bowles, 1990 Fair Chair, said it up best when she said “I learned that the magic begins to be created the day after last year’s fair, and that the magic is in each one of us who contributes from her heart and helps sponsor the community of Edgewood children.” 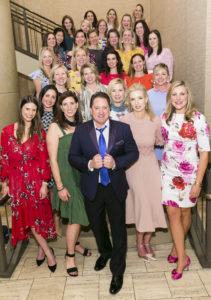 Your ticket for the: Edgewood Auxiliary