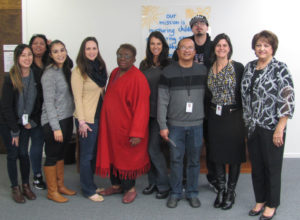 Congratulations to the MAXIMUS Foundation for heroically stepping up to help Edgewood’s vulnerable Kinship Families in San Mateo County beginning in 2014 with a $3,000 grant and for continuing to provide this critical support for four consecutive years.

Eight months ago, MAXIMUS Foundation’s Lili Zahedani presented the check for the 2017-18 grant year to Edgewood’s San Mateo staff (see photo). Since that time, Edgewood has positively impacted 227 low-income and underserved kinship family members in San Mateo County. As a result, 85% of caregivers reported an increase in parenting strength and capacity, and 98% of kinship children and youth remained safely in a loving home and out of the foster care system.

Kinship families are created in the wake of trauma when a relative such as a grandmother steps in to raise a child whose parents are not available due to abuse, neglect, incarceration, substance abuse or death. Rather than be placed in foster care, the child is able to stay with a loving relative, who is often facing health challenges of their own due to poverty, poor access to health care and social inequities.

Since 2000, Edgewood’s San Mateo Kinship program has provided support services to more than 2,000 kin caregivers. We could not have this impact on the community without the generosity of our grant makers such as the MAXIMUS Foundation.

The Maximus Foundation is dedicated to supporting nonprofits, like Edgewood, who are committed to helping disadvantaged or otherwise underserved youth, families, and communities.

Your ticket for the: Foundation Spotlight: the MAXIMUS Foundation